Write updates about your team or the league here.
Post Reply
16 posts • Page 1 of 1

With new GM TheTwoWallaces (and memories of the Malice at the Palace long forgotten), the Indiana Pacers are setting themselves up for a long look in the mirror this coming off-season.

After several seasons of middling results, TheTwoWallaces is leaving no stone unturned, A particular focus appears to be the large contracts tied to aging veterans Kevin Love & Victor Oladipo. It appears evident that, several pieces away from contention, it is time for the Pacer organization to enter a rebuild.

Thus, meet the Win Slow approach. Make no mistake, Justise Winslow & Semi Ojeleye feature prominently in the Pacer leadership's vision of the future (as do WinSlow & WinsLow puns). Combined with a projected high first round draft pick and one of of the largest cap rooms in the league, the Pacers organization feels that it has the beginnings of a successful rebuilding project well underway. 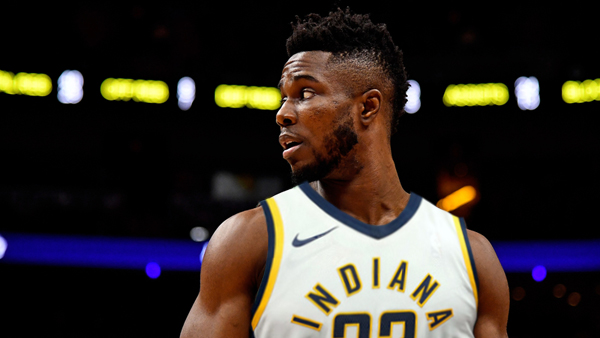 [/code]
Amid rebuild, Ojeleye will get a chance to prove himself [photo credit: ozymandias]

One key hindrance to the organization's new Win Slow approach is the lack of a 1st round pick in the 2024 draft. Indiana will likely find themselves in a quagmire next season: Unlikely to win but without one of the NBA's greatest mathematical quandaries: a benefit to losing. However, TheTwoWallaces portrays this situation as an advantage. With no need to lose next season, the team can be more patient in unloading the contracts of Oladipo & Love. Fans can therefore expect to see two of the greatest Pacers in recent years still dawning the Blue & Gold this fall.

As for on-court changes, TheTwoWallaces has immediately pointed to the possibility of a new Head Coach. Despite his stated utmost appreciation for all that Flip Saunders has given the franchise, TheTwoWallaces is likely to be looking for a coach that can spearhead their youth development. Though the team has one of the older average median ages in the league, it is evident that a rebuild will require taking chances on more unproven players with greater upside.

With the franchise positioning Winslow as the their main priority, look for them to seek a coach that will maximize his elite defensive play. It remains to be seen whether the organization will be looking for other elite defenders to compliment Winslow.

Until then, the Pacers plan on giving Ojeleye and Winslow (once he returns from injury), an opportunity to take the keys of the franchise away from aging veterans Love, Oladipo, and DeRozan.

Yep. Lose a ton of games next year would be good.
Top

That Swanigan trade the previous GM made definitely hurt the team but there's stilll more than enough to work with. Ojeleye I'm a fan of and Winslow is obviously very good. Lual-Acuil doesn't look bad as well (the team is yet to pick up 3rd and 4th year of his rookie contract, so defintiely consider doing it before the season ends).

If that's the route you decide to take, I guess it's all about finding the right deals for Oladipo and Love, and your team will have bags of potential. Not having your first next year hurts a lot though.

I like Winslow and Ojeleye but aside from them, I think this team needs a makeover. There's enough talent on the team, but none of it really fits together at all. Interested to see how you shape it.
Rockets HTML _____ Panthers HTML

Basically, this team has 4 high SCR guys who are garbage shooters (Winslow, Love, Harper, Jennings). This team badly needs efficient shooting. DeRozan has been great since I fixed him all those years ago, but he's really best suited as a super 6th man playing 32 MPG at the wing spots.
Top

I think your better to retool not rebuild ..you have some good players

Agreed ... the Swanigan trade was big bullshit.
But nothing you can do about that.

Winslow and Oje are good players to start the project. And if there are no good offers for Love and Oladipo the team would be able to play some decent ball next season.
Top

This team is actually super talented and I kind of wish I could take them over. They could easily win 50 games this year with that roster so as long as you keep them intact and are present then you'll be okay. TJ wasted years of this teams prime though.

This team has an odd mixture of older guys, then younger talent. There's talent on paper, but you will need to make moves on the older the guys, and start rebuilding around your younger pieces.
Cotton/Trice/Ferrell
Devyn-Marble/Lewis
Hezonja/Dotson/Leaf
Anigbogu/Rabb/Giles/Spellman
Cauley-Stein/Marjanovic/Allen
Top

emplep7 wrote: ↑
Fri May 31, 2019 12:55 pm
This team is actually super talented and I kind of wish I could take them over. They could easily win 50 games this year with that roster so as long as you keep them intact and are present then you'll be okay. TJ wasted years of this teams prime though.

As for your actual team, its a tough situation but you have two young players to build around in Ojeyele and Winslow and then some good pieces in Dipo and Love. Your first rounder this season is actually really solid too so with some of the right moves you should be able to steadily improve this team and return them to their former glory.

I'm a huge Winslow fan but I wouldn't sell Dipo quite yet - or at least not unless you can get a nice haul. If he was given attention and pref work this season he's a guy that can give you secondary scoring and high level defense.
Top

Will be interesting to see which direction you take with the team.

So far with your pick slated around 5-8 range (unless you drop out) you can get a solid PG maybe Sexton or someone to pair with Oladipo and Winslow (should you keep him) and you're looking pretty good.

Edit: Ooohhh I see what you did there in the title

ayyyy I see what you did there... Win Slow haha
Top

With Winslow's lack of efficiency, you really need to target a high scorer or two (ratings wise, not stats) to keep his shots down a little.
sacramento kings

You should at least try to keep Winslow, Dipo and Semi together. You can build a pretty good defense around those 3. As for offense, grabbing a guy like Elie Okobo on the draft would do WONDERS for you, even if he can't guard anyone, you can easily cover his defensive mistakes and he would be the perfect piece to deploy at PG and give him as many shots as he wants, as he's a fantastic scorer with amazing touch from deep which you desperately need.
Instruct him to be a 3pt shooter only and its done. He's a perfect player to play next to Dipo / Winslow.

If you can't get him, you could try other players in the mould of Dame Lillard or Kyrie Irving. Guys who can carry an offense even if leaving a lot to be desired defensively. They could bring your team to another level.
And well, I would try to move Love for a defensive C. a Okobo / Dipo / Winslow / Semi / defensive C lineup seems really interesting IMO.
#19 M.Teodosic #32 J.Crowder #43 K.Leonard #39A.Davis #17 L.Birutis
#8 J.Jackson #14 G.Harris #52 J.Stokes